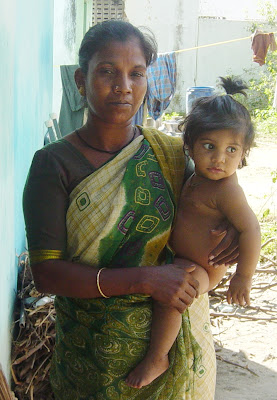 Vidya recently wrote to tell me that little Zeenath had been sick with the measles, but we can now see from this recent photo that she is is doing well. Akil and Sabi were delighted to see Zeenath looking so grown up and cute. She celebrated her first birthday in early January and has grown so much since the tiny seven week old baby we met.

Barry and I are taking Akil and Sabi back to India again in November 2008. We told our family we would visit again in 2009 but we have brought plans forward as we were missing them so much.
Posted by Julia Rollings at 6:44 pm

hey... Thank you so much for this fantastic story. God bless your family.

Wonderful story, you are very good people. Best of luck

Julia Rollings
Australia
After our oldest two girls were born to me, we adopted a baby boy from Korea, a two year old boy with special needs from Taiwan, and two older boys (brothers) from India. In 1998 we welcomed our youngest children, a brother and sister from India, into our large Australian family. In 2006 the director of our youngest children's orphanage was arrested, so we launched a private investigation to verify our children's history. We discovered they had not been willingly relinquished by both Indian parents, as we had been assured and legal documents attested. They had been taken from their mother while she slept and sold by their father. In March 2007 I travelled to India to reunite our son Akil, aged 13 and daughter Sabila, aged 12, with their first mother. Sunama and her second husband Babu lived in a small windowless room less than 5 X 3 metres, with their five young children. They did not have a tap or toilet. The family didn't speak or understand English but their welcome was warm and loving.We spent four days living with them. Their family is now part of our family.